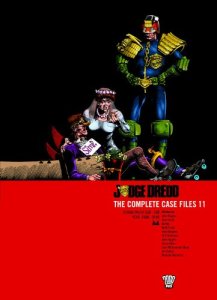 Once again we see the Black Ops of the Justice Department going to any lengths. Not to protect law and order but to protect itself. This is definitely a cautionary tale of government powers and real examples of the Judges becoming thought police. Scary stuff.

Possibly inspired by the Marvel “What If…” comics of the period this is a series of parodies of advertisements that would have been on British television at the time. Because the title prefaces the nature of the stories you know not to take it seriously. Unlike the clanger “A Real Xmas Story” from Prog 502.

If you aren’t familiar with the actual adverts themselves, which are now at least 20 years old they won’t make any sense. But if you are there is some sharp humour in here. Each of the five stories is drawn by a different artist helping to keep them separate.

This is a sequel to an earlier story Pinboing Wizard from a Judge Dredd Annual. At one issue this revenge story never has time to go anywhere and Max Normal is criminally wasted.

A good satire focussing on whether or not it is possible to actually live within the law or are all citizens doomed to failure.

Here is the very opposite of the previous story and the epitome of filler. As it concerns an out of control construction robot there is no characterisation, no empathy and no reason for this story to exist. The only point of note is the ‘playboy’ style vertical double page spread which may have caused some mothers a moment of consternation.