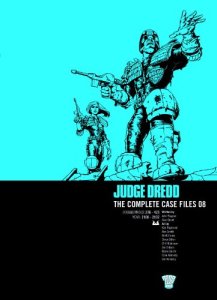 This is definitely an over the top story focussing on the cartoonish side of Dredd and the absurdity of catching the criminal at all costs – even if it means re-animating the dead. Having said that this single issue tale is a mine of world-building information. It introduces the Necropolis (the rich citizen’s alternative to Resyk) and reveals a lot about the Mega City legal system. The fact it has one is a shock for a start.

It’s always great to see another procedural story allowing us a glimpse underneath the skirts of the Big Meg. The constant radio chatter spewing out the data on huge numbers of crimes is perfectly atmospheric. It is really elegant how a tiny misunderstanding spirals out of control into a tragedy of epic proportions.

This is a memorable story for good and bad reasons. It was made during a time when racial stereotypes and funny accents were the norm. However it is a wonderfully touching story, almost 2000AD does Carrie, with a suitable tragic ending. Dredd isn’t centre stage and that makes the story more human. There is plenty of new megacity jargon bringing the Juve culture to life.

Building on the timeless theme of the prank call this reflects the heyday of the Jerky Boys while ominously foreshadowing the future problem of cyber bullying. As usual it is when the citizens turn on each other that things seems most tragic and it is always the innocent who suffer. And a new word enters the wonderful Mega-City lexicon. It was probably the printing but the blacks were much too thick and at points made some of the text unreadable.