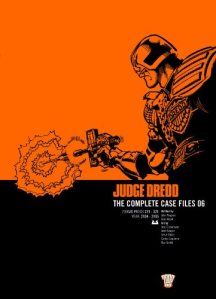 Robodogs run amok in a ruined sector of MC1. This tiny story has a number of the emerging themes of Judge Dredd. Nostalgia: There is a museum of 20th Century objects one of the most valuable is a Wellie Boot. The fickleness of technology: a man is killed by his own robotic guard dogs after forgetting his ID badge. Initially the dogs victims are attributed to vampires; a metaphor for how sinister and little understood technology has become.

Ron Smith does some great work. Particularly showing us the dog’s eye view of things.