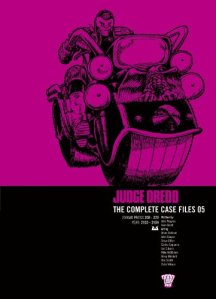 This is the story the phrase “tour de force” was created for. Wagner does his best work when given an infinite number of pages and carte blanche to destroy everything. This tale ran for six months and did the most damage to date to Mega City One.

As a child of the eighties this portrayal of nuclear war would scare you silly. Its depictions of destruction and death are given in uncomfortable detail and drawn straight from the prevalent government warnings of the time.

Wagner takes you through an entire war from planning and propaganda to invasion and resistance. This story has much in common with that other great story “The Day the Law Died” but loses the surrealist absurdity in favour of real horror. The radio messages from doomed outposts are particularly grim. We see Dredd leading a desperate guerrilla war once more to save his city.

This story is really dark too. Dredd goes to some bad places and we are uneasy with his choices, shooting the Chief Judge, executing collaborators, euthanizing radiation victims and nuking 500 million people with a button press. This is quite a ‘war is hell’ soapbox.

The tension throughout is great as you don’t see any way the Mega City can survive, much less win. The whole time Dredd is retreating as more and more sectors fall. It is a gripping story and the ending is superb.

Hershey and Anderson appear but only for the last few issues and not as characters but as plot devices. This afterthought is disappointing and it probably would have been better to leave them out altogether.

There is a lot of politics here; not just with a cold war allegory but the nature of regimes, the fickleness of allies, and the effectiveness of ultimate deterrents.

The whole run is drawn by Carlos Ezquerra and using a lone artist makes a huge difference. The world seems a lot more believable when seen in single style. Ezquerra’s rough art is perfect for the sense of devastation and the brutality and chaos of war.

This could be the ultimate Dredd Storyline.