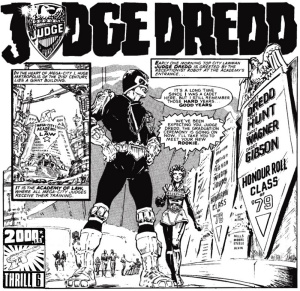 Plot: A rookie Judge passing out gets Dredd for his final assessment.

Verdict: A really good story. We learn a lot about the Judges and the two issues are just enough to cram in a bit of drama, a bit of characterisation and some excitement.

There is a slight crossover between Harlem Heroes, another story that also appeared in 2000AD, as the rookie Judge is the son of one of the Heroes. Another touch is the list of graduating Judges named after 2000AD writers and there is even a memorial to Judge Alvin – the first judge to ever die in a Judge Dredd Story in Prog 2.

In typical Dredd fashion we learn that cadet judges train with live ammunition so they can get shot and expelled on the same day as there is no room for careless Judges.

We have now left the wonderfully innovative and chaotic layout of the early strips in favour of squarer panels. The art is still good and portrays the action very well.