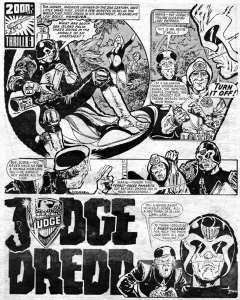 Plot: A man upset by the decline of monster movies uses creatures from a special effects museum to get revenge.

Verdict:
Not one of the brightest ones. The villain, besides having daft motivation, stops to explain his entire plan to Dredd before trying to kill him with a huge robot gorilla – the Krong of the title. Dredd speaks like he is a Scooby Doo character and he is narrating his actions out loud again.

There is still an emphasis that Mega-city one is in America and the Judges are part of the police. We get to meet Maria, Judge Dredd’s cleaning lady, who talka like dis, being created at a time when funny sounding foreigners were the height of British humour.

The criminal is once again hoisted by his own petard when his gorilla falls on him and kills him.

This is the first appearance of the art of Carlos Ezquerra, who was one of Dredd’s co-creators. His Dredd is very similar to Mike McMahon’s slender framed lawman.