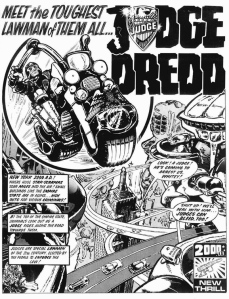 Plot: Someone is killing Judges. Dredd sorts him out.

Verdict:
It’s rubbish. In today’s postmodern world with sophisticated readers and cornucopia of narrative techniques it is basic, exposition heavy, and clunky to read. It looks like a five year old did it.

But having said that, to a young reader of the 1970’s, two months before Star Wars came out, this would be out of this world. You can see the kernel of the idea there that would snowball throughout the next three decades. The architecture, Judge’s uniforms and the Lawmaster bike are all fully formed with their iconic look and feel on day one.

It is labelled as New York 2099AD, the Judges are elected, and are presided over by the Grand Judge (whom Dredd calls “your honour”) at Justice HQ. And Devil’s Island (a prison on a motorway island surrounded by computer controlled juggernauts) makes its first appearance. Best of all Dredd is Dredd. Stoic, indefatigable and willing to die for the law.

A crude and humble beginning but a booming first step on the road to greatness.